I guess the headline pretty much says it all. Or maybe this picture says it better. 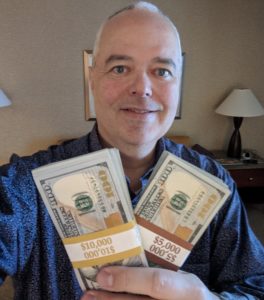 Honestly, my plan was to run deep in this thing. I had a very respectable stack going into Day 3, and I started off winning three quick pots. Then things started going down hill. It was a real struggle the rest of the day. I was just completely card dead, folding hands like 93o, 82o and 74o for 2-3 orbits in a row. Then, when I did pick up a hand I could open with, it was usually near the bottom of my range–something like 8c6c–and then the flop would come with all over cards and not even any backdoor straight or flush equity. So I’d have to give up to any pressure.

Finally, the aggressive pro who was the big stack two seats to my right–Thomas Lutz–opened a pot and I looked down at AA. Woohoo! I raised him, hoping for the four-bet which I had already seen him deploy a few times. Sure enough, he put in the raise. At this point, I was trying to figure out a way to get all the money in the pot, and the shove seemed just a bit too big. So I went with a very small five-bet, just hoping he had KK or would go crazy with AK or QQ. He shipped it in, and I called, of course. I was really disappointed to see he had the other two AA. Even worse, he flopped the flush freeroll, so I had to sweat the turn and river. Luckily, they bricked out and after all that excitement, we chopped up the blinds and antes.

That was basically my only premium hand the rest of the day. I never got AK or KK or QQ or JJ or even TT. I only got AQ a couple times, and lost both of those. My biggest pot of the day was won with a big semi-bluff on the turn. I closed the action in the BB with 6c2c pre-flop in a rare (for a serious tournament) four-way pot. The flop came Tc5d3c, giving me a gutshot and a small flush draw. The SB led out and I called. Everyone else folded. The turn was an offsuit Q. The SB bet again and I raised big. He tanked for a while, showed a T, and folded.

In short, I just couldn’t get anything going, and my stack kept dwindling. I dropped below the average stack for the first time in the tournament. And I just kept dropping. Nothing was working to win a pot.

Finally, my table broke, and I got sent to the Amazon room. I won one of my first hands at the new table, but that turned out to be the last hand I’d win in this tournament. Back to being card dead, folding to three-bets pre-flop, or whiffing on the flop.

I was happy to see my buddy Herb Doolin show up on the rail in Level 14. He had just flown into Vegas and came by to sweat my Main Event action. There was a dinner break after Level 14, so we went to the Chinese restaurant at the Rio and talked strategy.

At the next level, I would have to put 12,000 chips into the pot on every orbit. That meant if I folded every hand, I could survive 6.75 more orbits, or basically 60 hands. And the board showed that 132 players needed to bust out before we’d be in the money. The big question was whether or not those 132 bust outs would come before I ran out of chips in the next 60 hands. It seemed really close.

So I decided if I got any premium hands early in Level 15, I was shoving and taking my chances. In the meantime, I closely tracked the bust outs and the rate at which we were playing hands at my table. If it looked like I wasn’t going to make it, I’d have to shove with something before I got too low on chips to have any fold equity.

I never got anything except junk hands in the early going. But luckily, there were several long hands at my table, and the first orbit took 24 minutes. And in that time, we got down to 78 players from the money. Two orbits took 48 minutes, bringing us 42 from the money. At that point, I decided I could safely fold my way into the money, and anything else would be too risky in terms of overall equity. Plus, I really wanted to put a Main Event cash on my résumé.

So from that point, I just watched the tournament clock as the “Players Left” count steadily dropped down to the magic 1182 number. When it got down to 1184, we stopped play and went hand for hand. On the first hand, there were three all-ins that got called. One of those three resulted in an elimination. That took us to the stone bubble. But it also brought us to the end of Level 15, so the tournament director called for a 15-minute break to race off the $500 chips.

Herb and I kind of nervously stood around and waited during the break. I had enough chips for ten more hands. Surely the last needed bust-out would come on the next hand or two, right?! 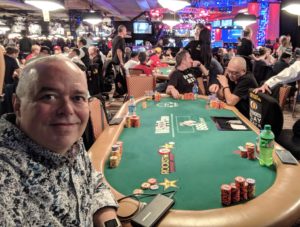 After the break, on the first hand of Level 16, the whole room broke into celebration when one poor guy with A5 got his hand in against AQ and never improved. We made the money!

Of course, by this point, I didn’t really have any ammunition. I started Day 4 with 22,000 chips. Not even four big blinds. On the first hand, it folded to me, I picked up A2o, and tossed my chips into the middle. The button folded. The small blind folded. That left it to the big blind to try to knock me out. When he looked at his cards, I knew I was ahead, but he called with 8To. He spiked an 8 on the turn, and that was the end of my Main Event.

All in all, I was pretty happy to walk to the payout room and collect my $15,000 for finishing in 1179th place out of 7874 entrants (the second largest Main Event field ever). I’m pretty sure I’ll be back next year, and I’ll be working hard to run much deeper.